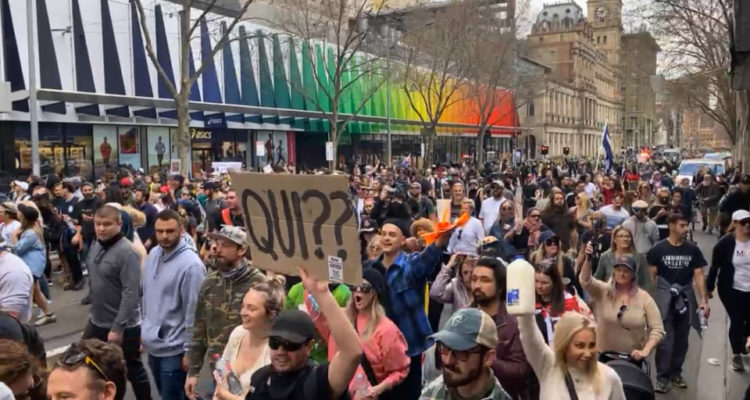 Neo-Nazis are targeting anti-lockdown rallies and using covert tactics to indoctrinate frustrated Australians into their hate-filled and violent ideology.

At least two leaders of the far-right National Socialist Network were at Melbourne’s anti-lockdown protest on the weekend, trying to recruit new members to their group, The New Daily can reveal.

It comes as Anti Defamation Commission chairman Dvir Abramovich, warned extremist groups are using the COVID crisis to “fan the flames” of hatred, resulting in increased anger towards the Jewish community.

Before the weekend rally, the two neo-Nazi leaders, who TND has chosen not to name, appeared on a far-right anti-semitic YouTube show watched by almost 1000 people.

They discussed tactics neo-Nazis attending the anti-lockdown rally should use to recruit members.

“Breadcrumbs is the way to go guys,” one of the men said.

“If you go about, like, just openly, y’know, ‘it’s the penguins [code for Jews], it’s the Jews’, you kind of come across as loony to these people.”

The neo-Nazi leader told followers to use ambiguous messaging, specifically ‘Qui?’, which means ‘who?’ in French, which has emerged as the far-right’s latest anti-semitic slogan of choice, and is used to engage people in conversation.

Then he instructed members to push people they conversed with at anti-lockdown rallies towards anti-semitic conspiracy theories with a link to more information.