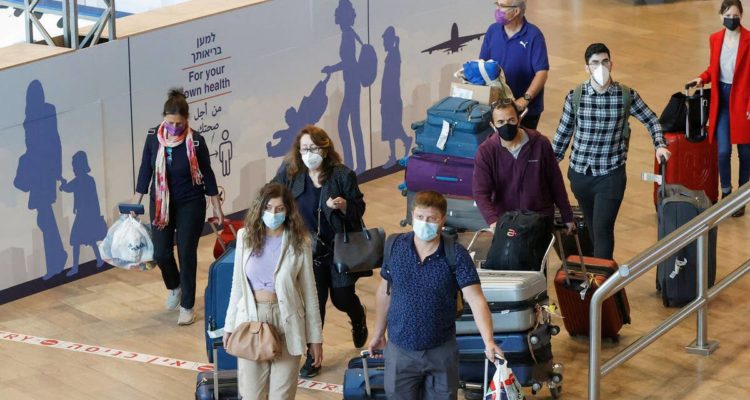 Israelis and vaccinated tourists wearing masks for COVID-19 protection arrive to Israel’s Ben Gurion Airport near Tel Aviv on May 23, 2021, after a partial re-opening of the border to inoculated tourists from 14 countries. (Ack Guez/AFP via Getty)

The program will apply to tour groups of between 5 and 30 people from Israel’s list of green, yellow, and orange countries, per AP, while those on the red list, which denotes “highest risk” will still be barred. There are only four countries on the “red” list – Turkey, Brazil, Bulgaria, and Brazil, according to Israel’s health ministry.

Incoming visitors will need to be fully vaccinated within the last six months or have a booster shot, the tourism ministry told Reuters. Additionally, they will also need to present a negative COVID-19 PCR test taken within 72 hours of arrival, and undergo another antibody test once they arrive at Israel’s airport, per the wire agency.

The announcement came as Israel is now the country with the second most daily infections per capita in the world, according to the New York Times COVID-19 tracker. Israel has 104 cases per 100,000 people, per the tracker, registering more than 9,400 cases daily on average in the past week.

Read the article by Vanessa Gu in Business Insider Australia.