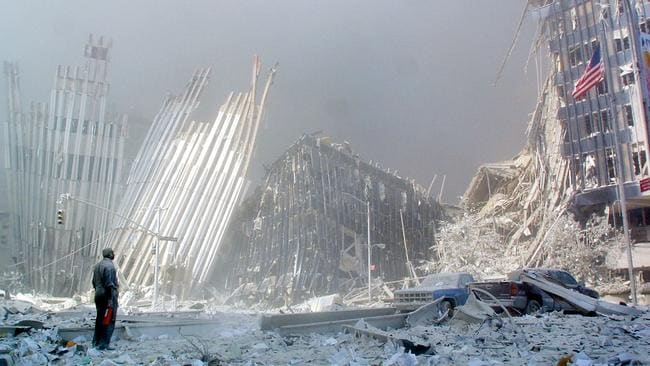 A man stands in the rubble after the collapse of the first of the twin towers of the World Trade Centre in New York on September 11, 2001. (AFP)

Revenge for 9/11, like the Holocaust, would be in thriving

A few weeks before the surrender of Nazi Germany in May 1945, a group of survivors of the Holocaust met in Bucharest to mark Passover, the Jewish festival of freedom. Among the group was Abba Kovner, who had escaped the Vilna ghetto and led a partisan campaign that struck at the Nazis and their collaborators from the forests of Lithuania.

Kovner was consumed with desire for revenge. “He will repay them for their iniquity and wipe them out for their wickedness,” he told his fellow survivors at the gathering, invoking Psalm 94 and God’s promise to deliver vengeance upon the enemies of Israel.

After the war, Kovner and his comrades, known as the “Avengers”, hatched a series of plots to exact retribution for the murders of their families and the near annihilation of the European Jews.

Most were aborted but the Avengers did succeed in getting their operatives into the kitchen of the Stalag 13 prisoner of war camp at Langwasser near Nuremberg, where Nazi SS, the units responsible for the implementation of the Final Solution, were being held. They planned to poison the bread of the prisoners, but the poison failed to take full effect and not a single SS man died.

The pursuit of revenge after the Holocaust proved futile. How does one even begin to avenge such a crime, really a sequence of millions of individual crimes, including the murders of one million children, carried out by hundreds of thousands of perpetrators across Europe?

Read the article by Alex Ryvchin in The Australian.