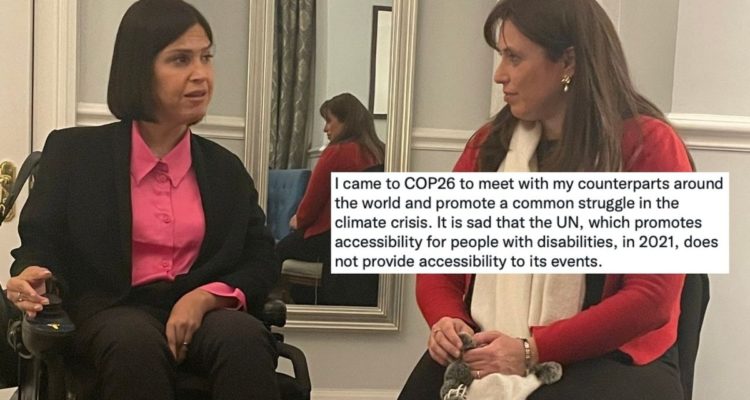 It’s 2021, Yet An Energy Minister Was Left Outside COP26 Bc It Wasn’t Wheelchair Accessible

The Energy Minister for Israel/occupied Palestine said she was left waiting outside the COP26 summit for two whole hours on Monday because the event wasn’t wheelchair accessible, in 2021 of all years.

Minister Karine Elharrar, who has muscular dystrophy and uses a wheelchair, said in an interview that she wasn’t able to enter the grounds of the conference because the only two ways to do so were to either walk, or take a shuttle, neither of which are possible for her in her wheelchair.

“I came to COP26 to meet with my counterparts around the world and promote a common struggle in the climate crisis,” Elharrar wrote on Twitter.

“It is sad that the UN, which promotes accessibility for people with disabilities, in 2021, does not provide accessibility to its events.

“Hopefully the lessons learned will be learned so that tomorrow green energy promotion, removal of barriers and energy efficiency will be the things I will deal with.”

Elharrar’s office told the Times of Israel that she waited outside the summit, which was held in Glasgow, for two hours before she eventually had no choice but to return to her hotel in Edinburgh, which is 80km away.

Israel’s Foreign Affairs Minister Yair Lapid also called out COP26 organisers on Twitter for their outdated inaccessibility, saying: “It is impossible to safeguard our future and address the climate crisis, without first and foremost caring for people, including ensuring accessibility for people with disabilities.”

Read the article by Soaliha Iqbal in Pedestrian TV.