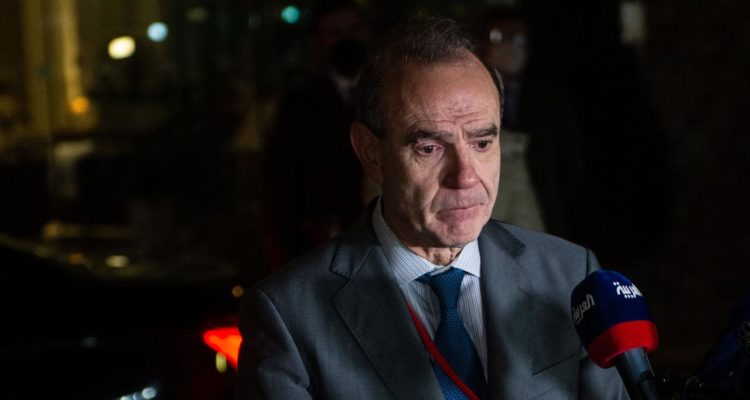 Deputy secretary general of the European External Action Service Enrique Mora briefs journalists after the first round of talks with Iran in Vienna. (AFP)

Senior European diplomats have warned that negotiations to ­revive nuclear talks could be ­terminated if Iran moves to produce weapons-grade nuclear fuel.

“It would seriously imperil the process” if Iran did something “as provocative as going to 90 per cent enrichment”, said a senior diplomat from the three western European nations re participating in the talks – Britain, France and Germany.

The warning came on the second day of the latest round of talks in Vienna aimed at restoring the 2015 nuclear deal, which lifted most international sanctions on Iran in exchange for tight but temporary restrictions on Iran’s nuclear program.

The European diplomats said it wasn’t yet clear if Iran’s negotiating team, participating in its first round of talks under new hardline President Ebrahim Raisi, was serious about reaching an agreement. They said Iran needed to negotiate substan­tively in the next few days.

The Biden administration has set restoring the nuclear deal as a top foreign policy goal. Mr Raisi has expressed scepticism about the nuclear agreement but ­Iranian officials say they want to restore the agreement to win sanctions relief.

In April, when the talks on restoring the nuclear deal started, Iran began producing highly ­enriched uranium at 60 per cent purity for the first time. That is a relatively short technical step from producing 90 per cent weapons-grade material. Iran has said in recent months that it could produce 90 per cent ­enriched uranium, suggesting it could be used for nuclear ­submarines.

Read the article by Laurence Norman in The Australian.