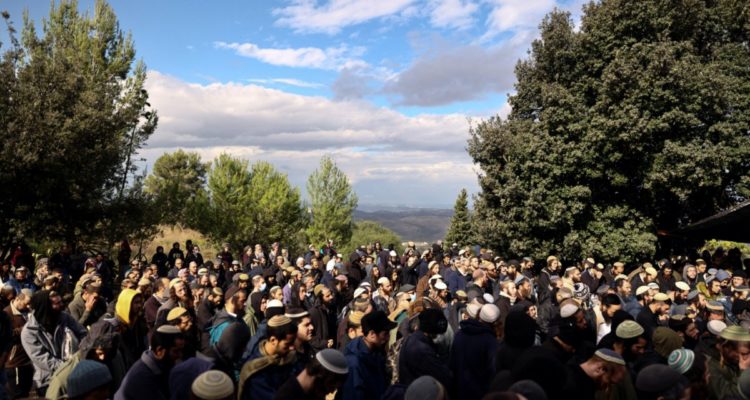 Relatives and friends mourn during the funeral procession of Yehuda Dimentman who was killed in a Palestinian shooting attack near the Jewish outpost of Homesh in the Israeli-occupied West Bank, on 17th December. (Ronen/ Zvulun)

Settlers clash with Palestinians in aftermath of West Bank killing

The United Nations Mideast peace envoy warned against escalating tensions on Friday after Palestinian gunmen killed an Israeli in the occupied West Bank and Jewish settlers were accused of attacking Arab villages in the aftermath.

Yehuda Dimentman, 25, was killed on Thursday in an ambush on his car as he left Homesh, an Israeli settlement in the northern West Bank that was evacuated in 2005 and is now home to a religious seminary.

On Friday hundreds of mourners boarded armoured buses to Homesh for a memorial service at which some called for the settlement to be re-established.

Even as the procession took place Palestinians reported settlers attacking nearby villages, shooting, hurling stones and injuring one man in his home in Qaryut. Settler leaders said Palestinians also threw rocks at Israelis.

Tor Wennesland, the UN special coordinator, said he was “alarmed” by the escalation.

“Last night, Palestinian assailants opened fire toward an Israeli vehicle near Nablus in which one Israeli was killed and two others injured. Since this morning there have been several retaliatory attacks by Israeli settlers against Palestinians,” he said. “These tragic incidents, and numerous others in recent weeks, highlight the volatility of the current situation.”

No Palestinian group claimed responsibility for the latest shooting, which follows several Palestinian attacks on Israelis in recent weeks. Palestinians also complain of attacks by settlers, whose residence in the West Bank the international community considers illegal.

Read the article by Ali Sawafta and Nidal Al-Mughrabi in Sight Magazine.