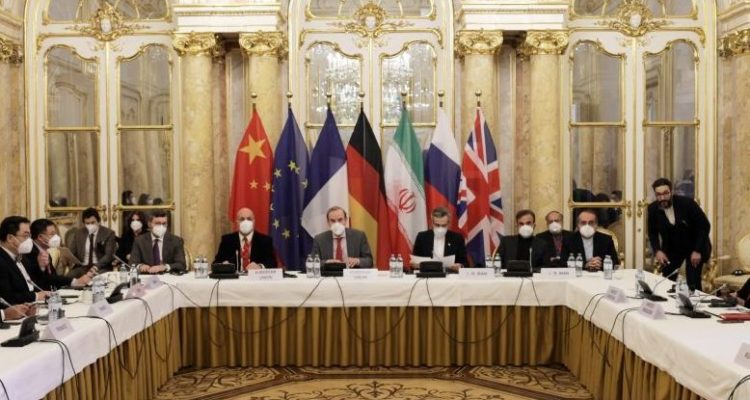 Delegates at a meeting in Vienna aimed at reviving the Iran nuclear deal in December last year. (AFP)

As the year draws to a close, the Persian Gulf region as a critical component of the wider Middle East remains in the throes of certain shifts towards relative stability and potential conflict. Relations between the northern and southern zones of the Gulf appear to be improving. Yet tensions between Iran and Israel and between the US and Iran are on the rise. Whether they develop into a confrontation will depend on the outcome of the Vienna negotiations to revive the 2015 Iran nuclear agreement (the Joint Comprehensive Plan of Action, or JCPOA).

The US’s Afghanistan fiasco has pleased Iran but alarmed its Arab neighbours. While uncomfortable with the return to power of the Pakistan-backed, extremist Sunni Islamic Taliban, the leadership of the predominantly Shia Islamic Iran could not but view the US defeat as a serious blow to America’s ‘hegemonic’ presence in its neighbourhood. It has emboldened the new, hardline President Ebrahim Raisi to drive a tougher bargain in the Vienna negotiations.

This development, plus the indirect US–Iran talks to rejuvenate the JCPOA, has led Washington’s regional Arab allies to wonder about America’s role as a security provider and Israel to worry about any possible breakthrough in Vienna that could benefit its arch foe. Israel abhors Iran’s nuclear program and defence capability as well as its regional influence from Iraq and Syria to Lebanon and Yemen. Like US President Joe Biden’s administration, the Saudi leadership and some of its partners in the Gulf Cooperation Council share Israel’s concerns but view diplomacy as the best option for the time being.