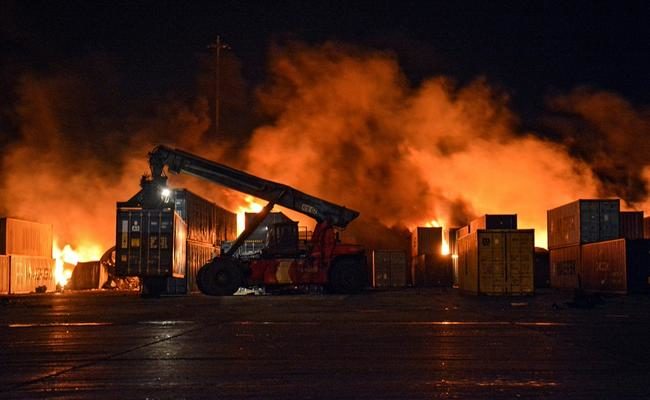 An Israeli air strike hit Syria’s Latakia port before dawn on Tuesday, sparking a fire that lit up the Mediterranean seafront in the second such attack on the key cargo hub this month, Syrian state media reported.

Since the outbreak of Syria’s civil war in 2011, Israel has routinely carried out air strikes on its strife-torn neighbour, mostly targeting Syrian government troops as well as allied Iran-backed forces and Hezbollah fighters.

“At around 3:21 am, the Israeli enemy carried out an aerial aggression with several missiles from the direction of the Mediterranean… targeting the container yard in Latakia port,” Syrian state news agency SANA cited a military source as saying.

Asked about the strike, an Israeli army spokesman said: “We don’t comment on reports in foreign media”.

The news agency said the containers were carrying “engine oil and spare parts for cars and other vehicles”.

It said it was unclear whether the arms were from Iran or some other supplier.

The Syrian government’s other major ally, Russia, operates a naval base in the port of Tartus, 85 kilometres (53 miles) to the south.

“We don’t think that any situations of this kind contribute to the stability of the Middle East or the situation in Syria,” said Russia’s deputy representative at the United Nations, Dmitry Polyanskiy.

Read the article in The Advertiser (AFP).