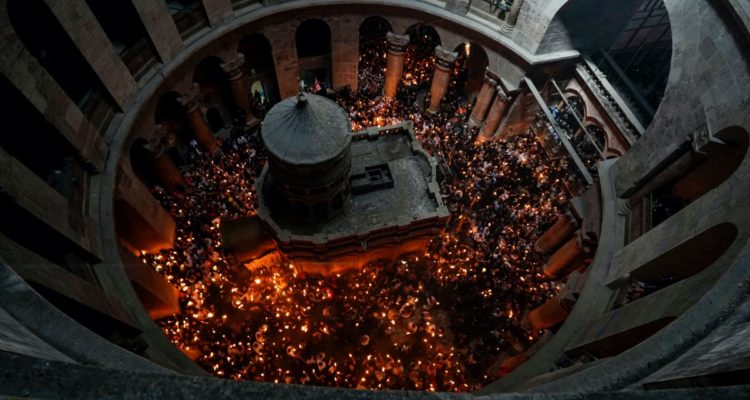 Christian pilgrims hold candles as they gather during the ceremony of the Holy Fire at Church of the Holy Sepulchre, where many Christians believe Jesus was crucified, buried and rose from the dead, in the Old City of Jerusalem dead, on Saturday, 23rd April. (AP/Tsafrir Abayov)

Christians celebrated their “Holy Fire” ceremony at the Church of the Holy Sepulchre in Jerusalem on Saturday against a backdrop of rising tensions with Israel, which imposed new restrictions on attendance this year that it said were needed for safety.

Israel says it wants to prevent another disaster after a crowd stampede at a packed Jewish holy site last year left 45 people dead. Christian leaders say there’s no need to alter a ceremony that has been held for centuries.

In the dense confines of Jerusalem’s Old City, where Jews, Christians and Muslims must share their holiest sites – no matter how reluctantly – even small changes can cause prophetic angst.

The city has already seen a week of clashes between Palestinians and Israeli police at the nearby Al-Aqsa Mosque compound, the third holiest site in Islam. It stands on a hilltop that is the holiest site for Jews, who refer to it as the Temple Mount.

This year major Jewish, Christian and Muslim holidays have converged against a backdrop of renewed Israeli-Palestinian violence. Tensions have soared as tens of thousands of people flock to Jerusalem’s Old City to visit some of the holiest sites for all three faiths for the first time since the lifting of pandemic restrictions.

Eastern Orthodox Christians believe that on the Saturday before Easter a miraculous flame appears inside the Church of the Holy Sepulchre, a sprawling 12th century basilica built on the site where Christians believe Jesus was crucified, buried and resurrected.

Read the article by Joseph Krauss in Sight Magazine.