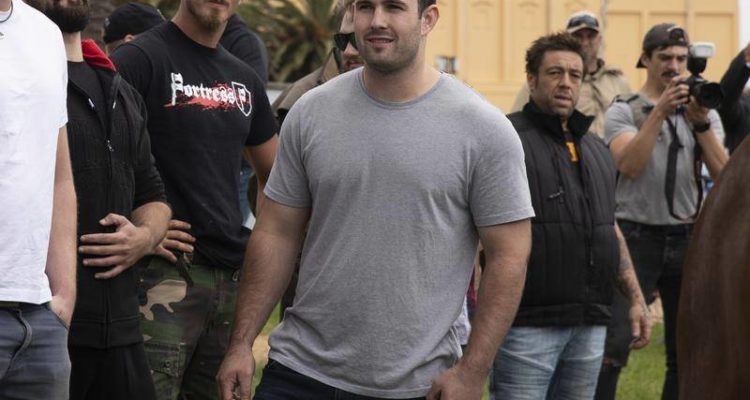 The leader of a neo-Nazi group accused of repeatedly punching a Channel 9 security guard has claimed he was trying to defend someone else.

The leader of a neo-Nazi group who allegedly assaulted a security guard outside Channel 9’s office claims he was acting in defence of another.

Thomas Sewell is accused of repeatedly punching a guard after he demanded to see staff from A Current Affair, which was broadcasting a story about the neo-Nazi group on March 1 last year.

At Melbourne Magistrates’ Court on Friday, Mr Sewell’s lawyer, Kieran Reynolds, flagged his client would contest the charges on the grounds he had stepped in to defend another person.

“There’s been an incident at Channel 9 where Mr Sewell stepped in; we say that he’s acted in the defence of another,” Mr Reynolds said.

CCTV and mobile phone footage captured the attack, which shows Mr Sewell punching the security guard multiple times in the head, as well as pinning him to the ground.

Police allege when the guard escorted Mr Sewell and a friend from the building, Mr Sewell attacked him.

He was later charged with affray, recklessly causing injury and unlawful assault.

The guard was taken to hospital for treatment.

Read the article by Miles Proust in the Herald Sun.