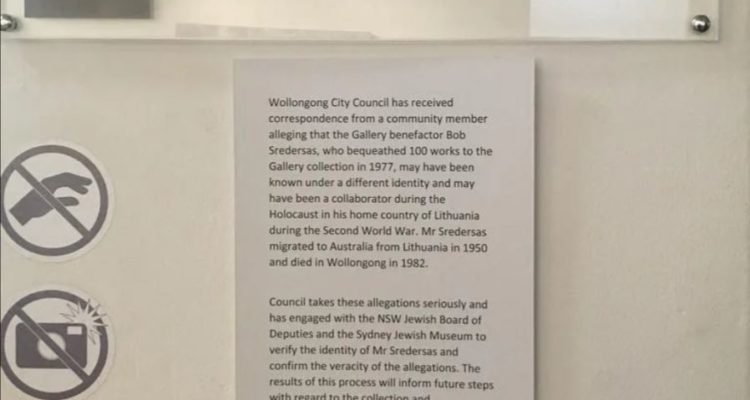 Sign posted below the plaque after preliminary findings Sredersas was a Nazi collaborator.

Wollongong Council will meet this week to consider stripping all recognition of Lithuanian art collector Bronius “Bob” Sredersas from the Wollongong Art Gallery following revelations the benefactor served as an intelligence officer in the Nazi security service during World War II.

The move could include renaming The Sredersas Gallery, the room that houses the huge art collection, and removing a plaque that honours his legacy.

Key figures from the Wollongong City Council, the NSW Jewish Board of Deputies, and the Sydney Jewish Museum will meet on Wednesday to discuss the findings of the investigation into Sredersas’s former life as a Nazi intelligence officer and collaborator. The report’s findings were revealed by The Australian on Monday.

“It has to be a truth-telling exercise that accurately reflects the story behind the collection.”

The room in the gallery remains named after Sredersas and the plaque still hangs on a wall. The council, after receiving earlier allegations, attached an addendum to the plaque that explained he “may have been a collaborator during the Holocaust”.

Read the article by Noah Yim in The Australian.