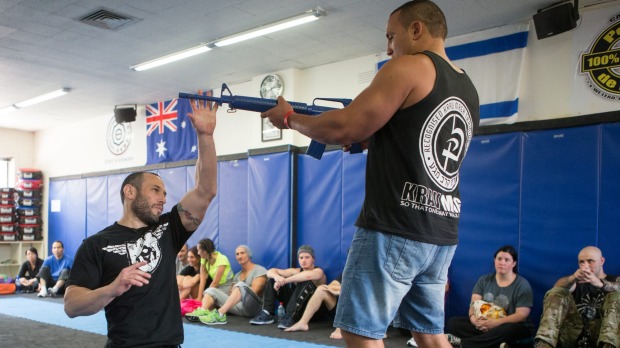 An Israeli-Australian business has been banned from Facebook after sharing an anti-Semitic message on social media.

Avi Yemini, the co-owner of IDF Training, said he was astounded his business had been banned from posting for three days for drawing attention to the hateful message posted on the business’ social media page on Thursday.

IDF Training is a pro-Zionist gym in Caulfield that trains members in Israeli self-defence techniques.
Advertisement

It received national attention after The Age revealed last year it had emailed its members, including minors, to spruik a new shooting course called “Intro to Israeli Tactical Shooting” at Oakleigh Pistol Club.

In November it offered to help its members join the Israel Defence Forces to help protect Israel against outside attacks.

Mr Yemini – a former Israel Defence Forces soldier who spent almost three years on the border of Gaza serving as a Golani Brigade sharpshooter – and his gym regularly come under attack from critics of Israel.

On Wednesday a man posted an offensive message on the gym’s Facebook page, claiming “Australia is against israel [sic]” and calling Mr Yemini a “pig f—-er”.

Mr Yemini posted a screenshot of the post on his Facebook page, with the hashtag #saynotoracism. He said he did so to raise awareness of the ignorance and intolerance Jewish people faced in the community.

The photograph was then reported by an unknown user for being offensive.

“Facebook then deleted it and suspended our account for three days from posting anything. I’ve spoken to Facebook explaining that it was in fact his vile message that was in breach of their terms, and that I couldn’t believe that not only are they siding with the racist user, they are penalising an advocate for understanding and tolerance.”

Read article in The Age

[Editor: Why does a newspaper publish this nonensense?]